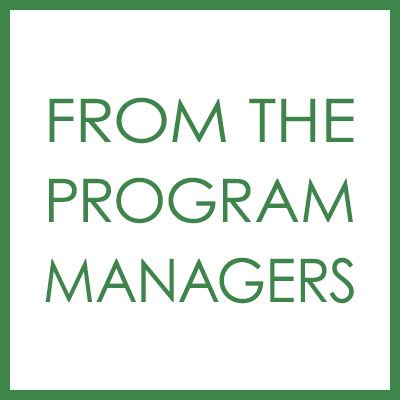 It may seem early, but we want to remind you to start thinking about progress reports and no-cost extension requests if you have an ASR project with a project period end date during the summer.

if your project has been directly affected by COVID, please get in touch with us as soon as possible and before you request a no-cost extension. We know that a number of PIs have had disruptions to field experiments and/or limited access to laboratory equipment. Other projects have had significant personnel impacts. In addition, we know that the TRACER campaign postponement will impact several ASR projects. We are working to provide an efficient solution to these issues and are gathering impacts to make a strong case for you.

If you have a project that is scheduled to end this year but were unable to complete the project as planned, your office of sponsored research is encouraged to submit a request for a no-cost extension sooner rather than later. If you have a project with a project end date between August 1 and September 31, please have the no-cost extension request submitted to DOE’s PAMS system no later than June 1. If your project period end date is earlier in the year than August 1, the no-cost extension request should be submitted no later than 60 days before the final project period end date. Please note that in recent years there have been considerable delays (e.g., mid-October) in receiving official notification that a no-cost extension will be granted for requests that we receive after June 1.

Final reports are due to the OSTI E-Link website no later than either 90 days or 120 days (depending on the terms of the award) after the project period end date. Our office sends out reminders to all projects that have ended. This is not done through PAMS but through another system, OSTI’s E-Link, so please work with your office of sponsored research to ensure these reports are submitted on time.