High Importance in the Heavens: The Enduring Challenge of Representing Clouds

With modeling in mind, one cloud microphysicist has gone far afield to research the properties and processes of Earth’s elusive cloud cover

It was 30 years ago this year that Greg McFarquhar graduated from the University of Toronto with a bachelor’s degree (with honors) in mathematics and physics. That fall, at the same university, he immediately started on a path to a Ph.D. in atmospheric physics. From there, McFarquhar rose into the heavens, you might say, as he pursued a career studying the basic properties of clouds.


All those years of studying clouds has yielded a vivid list of research interests. The Ontario native has investigated snow bands in winter cyclones, thunderstorms, hurricanes, cloud particles, freezing drizzle, clouds in the Arctic, the impact of biomass burning on cloud properties, and (in the near future) clouds in the Southern Ocean.
McFarquhar also designs and tests computer simulations, confronting all the puzzles behind cloud microphysical processes, including the stochastic frameworks needed to represent them.
All of these interests have so far added up to 149 peer-reviewed papers with over 7,500 citations. (He wrote his first paper at age 19, but was 21 by the time it was published.) Add to that 25 stints as an investigator in field campaigns, editorships, awards, invited lectures, memberships on panels and committees, and many grants—10 of them from the U.S. Department of Energy (DOE).
All this time McFarquhar has hewed to one overarching theme: to improve the understanding of clouds, their basic properties, and the ways to quantify their effects on weather and the environment. “The biggest puzzle we have,” he says of earth system models, “is a very poor understanding of the basic properties of clouds.”
McFarquhar points out that in any undergraduate pure physics lab a student can easily calculate the speed of light with an accuracy within 2 percent. But try looking at the number of ice crystals in a cloud. “We’re not even close to getting within 2 percent,” he says.
Arrayed against cloud researchers are the complexities of cloud properties themselves, and the physics that drive them: What are the size of cloud particles? How does that size evolve? What are the shapes of cloud particles? Their total mass, the speed at which they fall, or—the heart of the matter—their effect on radiation, extinction, and the scattering of light?
Such particles are also short-lived, hard to observe, and change all the time, says McFarquhar. “You can’t just watch the cloud particles grow.”

A Move in Pursuit of the Same Work


It was wanting to dig further into the deep puzzles of cloud physics that transported McFarquhar this summer from a longtime teaching post at the University of Illinois at Urbana-Champaign to a new role as director of the Cooperative Institute for Mesoscale Meteorological Studies (CIMMS).
His job, jointly at CIMMS and at the School of Meteorology at the University of Oklahoma (OU), involves promoting collaborative research between OU and the National Oceanic and Atmospheric Administration (NOAA) on problems of mutual interest. These include improving the basic understanding of mesoscale meteorological phenomena, weather radar, and regional climate. Broadly defined, he says, his new role at CIMMS is to bring to the institute “scientific leadership and vision.”
There are reasons for the move that can be more precisely defined. (No: One of them is not because Oklahoma has more reliably severe weather than Illinois—although that is an attractive idea to an atmospheric scientist.)
“I want to continue what I am doing, to get better representations of clouds in climate and weather models,” says McFarquhar. He includes better predictions of extreme weather, since part of the published CIMMS mission is “better forecasts and warnings that save lives and property.”
McFarquhar also sees CIMMS as a launching pad for getting some of his modeling work and field experience “into instruments and products” that have an impact on better understanding cloud processes. In turn, that would have an impact on models that improve predictive capability.
Models attempt to predict the mass and number of cloud and precipitation particles and how that mass and number is transferred between varying categories of particles. Models may either assume or predict information about the shape and density of particles in such categories. That affects the release of radiative and latent heating, which ultimately impacts predicted cloud fields.
Better models are the focus of his latest grant. McFarquhar and four colleagues are one year into a three-year project for Atmospheric System Research, a DOE program focused on a process-level understanding of the factors that influence the Earth’s atmosphere, including clouds and precipitation.
The project is using observational data from the DOE’s Atmospheric Radiation Measurement (ARM) Facility to test a novel statistical scheme for parameterizing ice microphysics in cloud and climate models. Developing a microphysical framework constrained by observations, the researchers say, represents “a significant shift” in the way things are done.
McFarquhar has been in the modeling business long enough to have witnessed the limitations of computational power in the early 1990s, and to be amazed at what today’s computers add to the precision and fine resolution of current models.
Even in 2001, when he started teaching at the University of Illinois at Urbana-Champaign, McFarquhar was performing numerical weather prediction research model simulations using what was then the finest typical horizontal resolution, a 2-kilometer grid cell, which today seems crudely large. One of his recent students completed simulations with a horizontal resolution of 200 meters.
When you study individual cloud elements, as McFarquhar does, the finer the resolution the better. “I’m primarily a microphysics guy,” he says, who looks at processes and particles on the microscale.
A cloud particle, for instance, may start out as 2 microns in size and grow to about a centimeter. It’s their tiny size, and the fact that they have such a large range of small sizes, he says, “that makes cloud particles very hard to measure.”
Clouds and the particles within them also have complicated life cycles that change with geography. “That’s why we go all over the world,” says McFarquhar.

For a Modeler, the Necessity of Travel


When he was an undergraduate studying physics and mathematics in his native Ontario, McFarquhar was far from imagining a career that would take him all over the world. [See sidebar.] For one, he had seldom traveled outside Canada. For another, his main interest was pure physics, and a largely interior world of leptons, muons, and neutrinos—“things you can’t visualize very well,” he says.
While still an undergraduate, McFarquhar stuck to math and physics and avoided courses in atmospheric science, despite two summers doing such research. (His first paper, when he was a rising junior, was on modeling the width and speed of the boundary between snow and rain precipitation.) Focusing on math and physics courses was the advice of Roland List, the University of Toronto professor whom he met at age 19, and who was one day to become his Ph.D. advisor.
To his master’s degree studies, McFarquhar brought the tools he had learned in nuclear and quantum physics. He found, as List had predicted, that they applied pretty well to studying cloud physics, including in matters of thermodynamics and heat transfer.
But something in the outside world was calling. McFarquhar, amid his master’s studies, grew restless in Toronto and talked to List about going somewhere else. His mentor had just the cure: a project in Malaysia to study the evolution of raindrop-size distribution. “That,” he says, “was the start of my field work,” as well as a desire to mix modeling work with “the visible natural world.”
Still, his eventual Ph.D. dissertation topic involved “pure cloud physics,” says McFarquhar. “I was mainly a numerical modeler, and not exploring all the applications of cloud physics.”
However, next in his academic journey was being a postgraduate researcher at the Center for Clouds, Chemistry and Climate at the Scripps Institution of Oceanography in southern California. Upon arriving in 1993, “I immediately went to Fiji” for a research project on tropical clouds, says McFarquhar, who then fully embraced the idea of science travel as a way to leaven the interiority of modeling. “I evolved.” (He studied at Scripps with Veerabhadran Ramanathan, a famously globetrotting atmospheric scientist.)
From 1995 to 2001, McFarquhar was a scientist in the Mesoscale and Microscale Meteorology Division at the National Center for Atmospheric Research in Boulder, Colorado. Among other things, the job took him to the Republic of Maldives as well as to College Station, Texas, and Salina, Kansas (where he studied what makes contrails persist).
Today, a recap of McFarquhar’s science destinations looks like a to-do list for a Fodor’s travel writer—perhaps if you leave out wintertime Cleveland and Peoria.
“Clouds are different in different parts of the world,” he says, a fact that makes travel an imperative for cloud scientists. In Fiji, convection generated clouds in rising updrafts over the ocean. In mountains east of Seattle (another research destination), the orography of steep terrain forces moist air to rise, affecting the air’s thermodynamics and altering the microphysics of cloud particle growth.
Clouds also experience different life spans related to regional weather. An ordinary thunderstorm might last an hour or two, and a mesoscale convective system up to 24 hours. A hurricane can last for days.
Now try to model those temporal and spatial scales down to the size of a thousandth of a millimeter. That’s McFarquhar’s world.

Next, Stormy Oceans and Arctic Clouds

In August, McFarquhar returned from nearly three weeks in São Tomé, one half of a two-island nation just west of Gabon in equatorial Africa. The year before he had been in Walvis Bay, Namibia, for the same biomass burning-cloud interaction study, NASA’s Observations of Clouds above Aerosols and their Interactions (ORACLES).
This fall McFarquhar will make a third research trip to Hobart, Australia, where he leads a team of 10 co-investigators in the Measurement of Aerosols, Radiation and CloUds over the Southern Ocean (MARCUS) campaign. Starting October 29, the campaign is slated to deploy four research cruises of about five weeks and 7,000 kilometers each to the epically stormy Southern Ocean.
Observations there of cloud and aerosol effects, says McFarquhar, have been “sparse and infrequent.” And despite their importance to global oceanic and weather dynamics, Southern Ocean atmospheric realities are poorly represented in earth systems models.
Wrestling data from the Southern Ocean into improved models will take up part of McFarquhar’s next research steps; so will more modeling work on clouds in the Arctic polar region, whose import “is a very important and growing issue,” he says.
Clouds everywhere concern and captivate McFarquhar and scientists like him, who search the heavens to better understand the Earth. 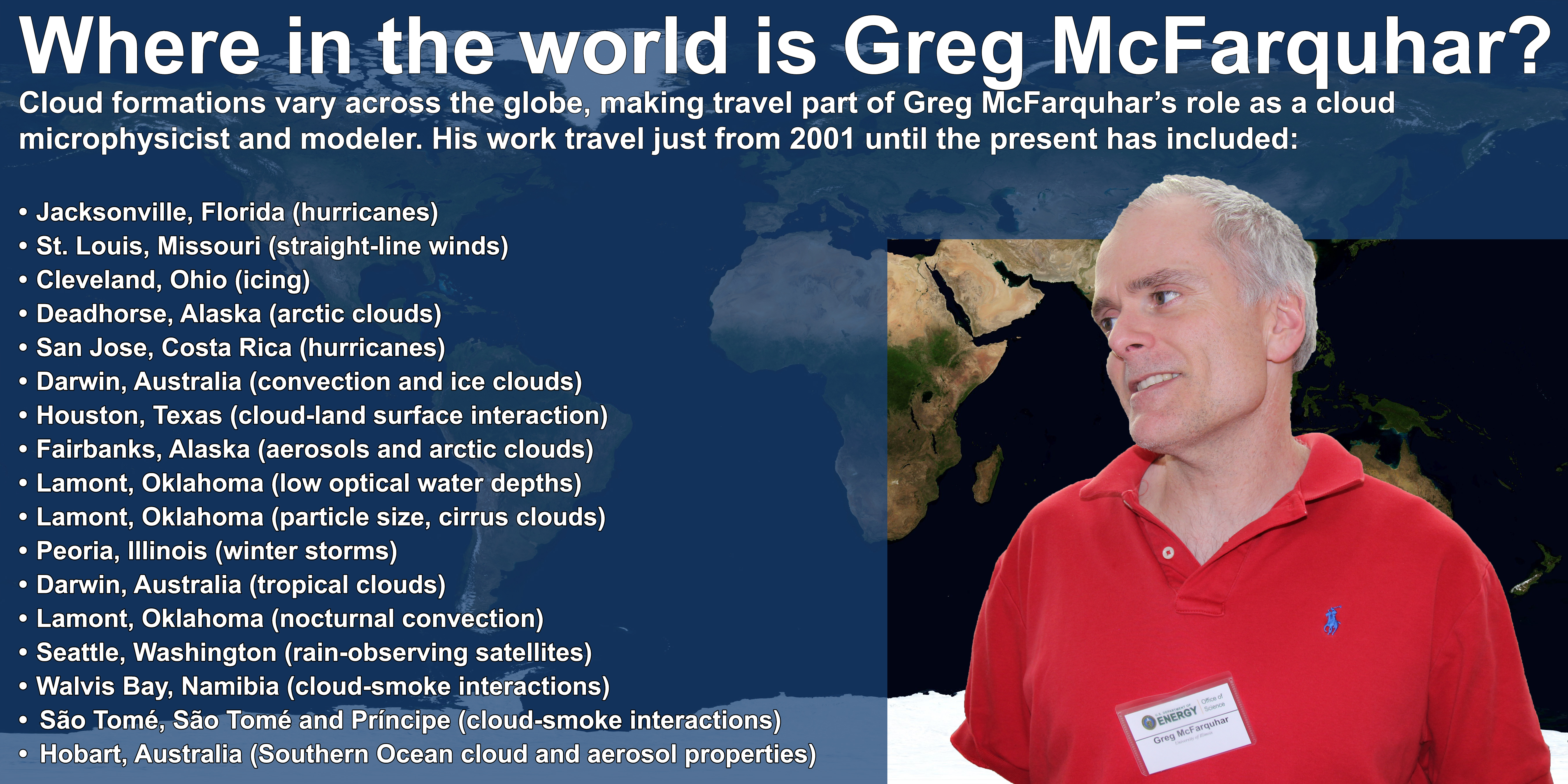 # # #
This work was supported by the U.S. Department of Energy’s Office of Science, Office of Biological and Environmental Research as part of the Atmospheric System Research Program.